Steadfast to the bitter end, Navy tradition isn’t all rum punch and pollywogs. For its 240th Birthday, here are 12 things you may not know about the United States Navy:

If you’re pulling duty on a submarine, it’s not by chance. Due to the claustrophobic and technical nature of the assignment, any Navy personnel serving on a submarine asked to do so.

David Farragut, who has a rich military history that spanned the War of 1812 and the Civil War, was the first admiral in the United States Navy. Some great Farragut trivia includes (1) joining the Navy at age 9, (2) being one of Abraham Lincoln’s pallbearers and (3) coining the famous quote “Damn the torpedoes, full speed ahead!”

Through World War II, sailors who did well were told “Tare Victor George,” which was code for “well done.” After the war, the North Atlantic Treaty Organization (NATO) was formed and it standardized communications. NATO created a system of B-flags for administrative communication. The last B-flag was BZ. The Allied Naval Signal Book created the phonetics for each letter and BZ became Bravo Zulu. 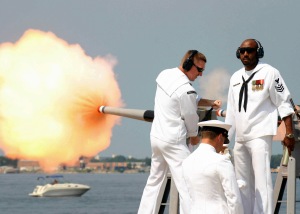 Often confused with the three-volley salute seen performed at military funerals, the 21-gun salute is a different ceremony entirely. Performed with cannons, the gun salute originates in the days of wooden ships and broadside cannons, when if a ship fired a volley in salute, it was powerless to defend itself for as long as 20 minutes while it reloaded the battery. When approaching ships fired a volley, shore batteries and forts would know the ship represented no threat. In time, this grew to become a gesture of respect, with both land and sea batteries firing odd-numbered volleys back and forth.

Today, the Secretary of the Navy has the final say on which ships and stations may fire gun salutes. A national salute of 21 guns is fired on Washington’s Birthday, Memorial Day, Independence Day and to honor the President or heads of foreign states. Additionally, ships may – with approval from the office of the Secretary of the Navy – provide gun salutes for senior officers using the following protocol:

All gun salutes are fired at five-second intervals and total an odd number.

If an anchor is fouled, it means the line or chain is wrapped around the shank and fluke arms. This indicates the anchor is no longer suitable for use. These retired anchors are usually displayed for decorative purposes on base or in Navy communities. The symbol is also part of the Chief Petty Officer rank insignia. When used in body art, the fouled anchor represents a tour across the Atlantic Ocean.

6. The story behind the art

Though tattoos are discouraged in today’s Navy, sailors for hundreds of years tattooed themselves as souvenirs to show where they’d been and what they’d gone through. Here is a short (and far from comprehensive) list we collected from sources around the Web of imagery you may encounter among saltier sailors, along with what each item means.

Sure, you want to write your lowercase letters correctly, but this wasn’t originally a grammar warning. Instead, according to the U.S. Fleet Forces Command, it was a way of keeping bar bookkeepers – and their seafaring patrons – honest in waterfront taverns. In centuries past, sailors often had bar tabs on credit, with barkeepers making marks next to each patron’s name under P for pint and Q for quart. Minding one’s Ps and Qs meant both settling up and also staying somewhat sober as to keep an accurate count on what one had consumed.

8. The Civil War had a significant naval strategy component

It may have been the North against the South, but the Atlantic Ocean still came into play. The Union went into the war with a plan to blockade the Confederacy's coastal ports while also advancing south via the Mississippi River.

Much like the Marine Corps camouflage pattern upon which the Navy version was developed, Navy “digis,” as they are often called, have tiny Navy emblems printed inside the pattern. Next time you’re close to a sailor, see if you can spot one.

10. Tossing a Dixie Cover under the Bridge

For many a short-timer, crossing under the Coronado Bridge (or any other bridge near home port) marks a moment of reflection. Should the sailor stay in or get out? Because sailors are often superstitious, many leave the decision up to the sea, tossing their cover into the deep. If it floats, the sea is asking them to stay. If it sinks, it’s time to move on.

11. In the Navy there are no windows, walls or bathrooms

12. The Legend of Bill the Goat

Bill the Goat has been the Naval Academy mascot since the early 1900s. Legend has it that a Navy ship once had a goat for a pet, and on the way home to port the goat died. Two ensigns were entrusted to have the goat stuffed, but got distracted by a Naval Academy football game. One of the ensigns allegedly dressed up in the goatskin and pranced around at halftime. The crowd loved it and Navy won the game.

As the COVID-19 outbreak is quickly evolving, the USO has pivoted resources across the entire global enterprise in an approach that helps care for military members and their families.

More from the USO